L-Carnosine has been discovered 100 years ago, why hasn’t it became popular earlier?

A typical red meat meal provides 250 mg of pure L- carnosine, but the problem is that it is quickly degraded in the body by the carnosinase enzyme.  What this means is that even if a person relied on red meat for their carnosine, it would not last long enough in the body to provide sustained protective effects. It is the same situation with supplements containing pure L-Carnosine. When using pure L carnosine supplements, the resorption is pretty low, due to quick degradation in the blood.

Formulation of Karnozin Extra ensures not only constant but also a high concentration of carnosine in tissues during 8-12 hours, therefore making it easy for consumption because you only need to consume it in the morning and in the evening in order to round up a whole 24h period. With pure carnosine you would need to take carnosine supplement almost every 30 min, but not only that, you would need much higher dosages (from 1mg to 2 mg every hour) !

Please see the chart below to see the huge difference between L carnosine and Karnozin Extra formula: 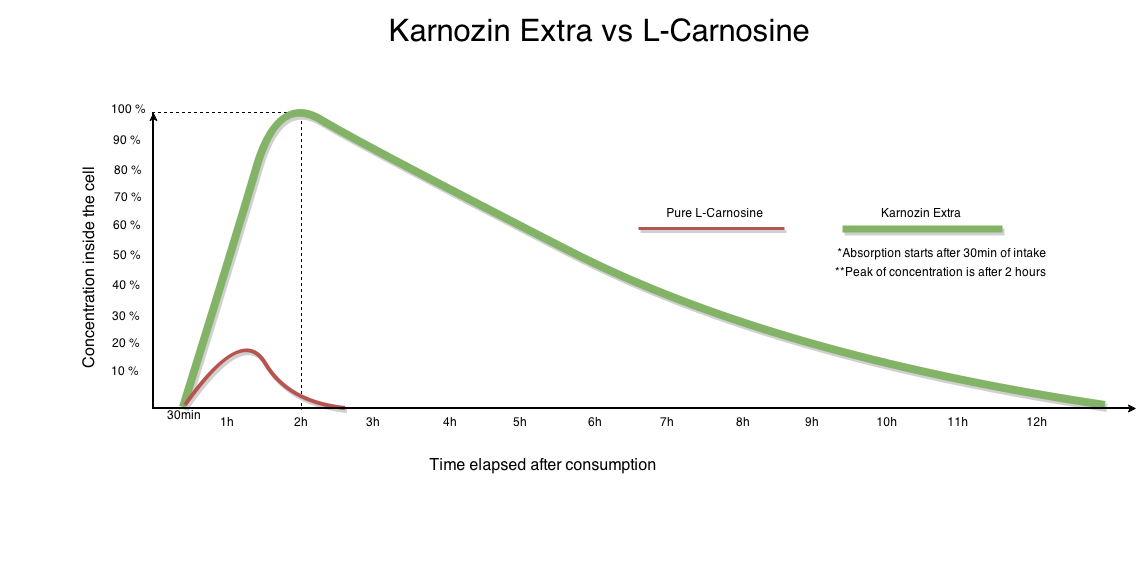 Since nowadays value-for-money plays a very important role, in order to give some financial overview, the chart below adds another dimension of difference between pure L carnosine and Karnozin Extra:

* Average retail price of 500 mg of pure ingredient per capsule, this may vary slightly.